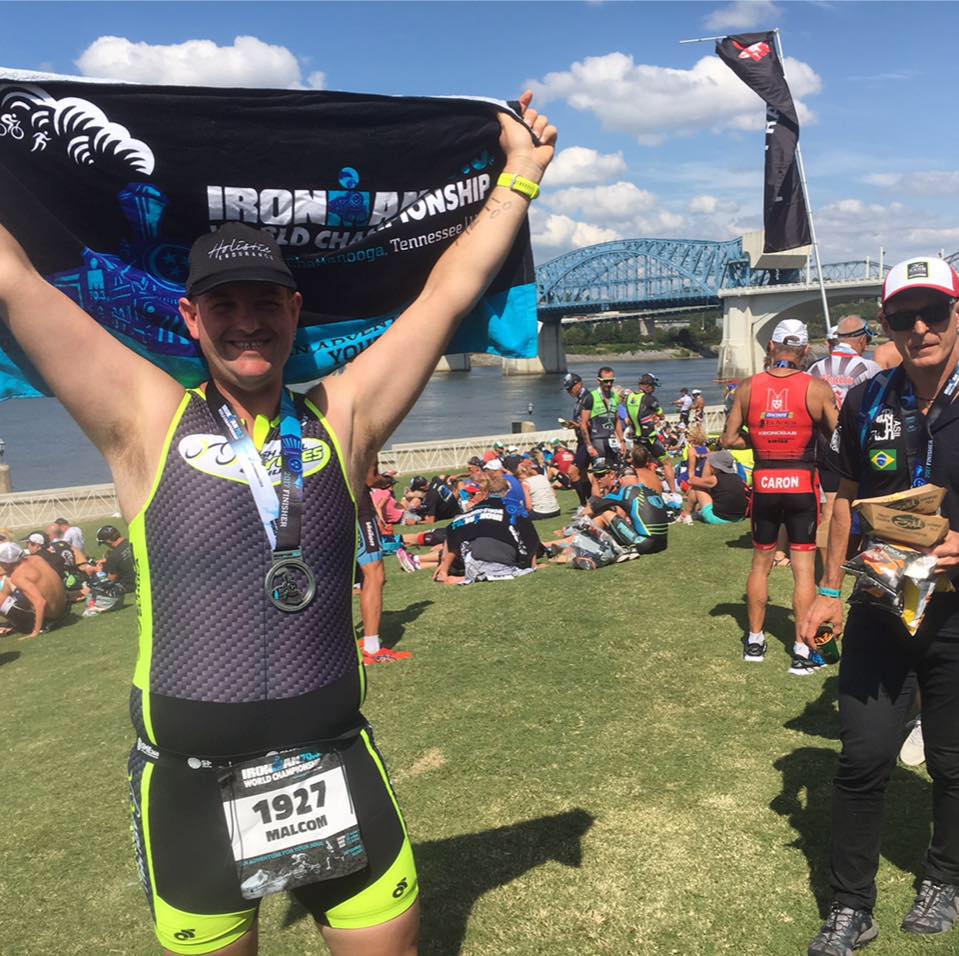 4 years ago, this father from country Victoria was in the depths of obesity. Overweight and unhealthy he realised he needed to turn his life around. His journey from obesity to getting himself to the start line of his first Ironman is a remarkable one. But it certainly wasn’t all smooth sailing. No journey ever is. Just moments before the start of his first Ironman, he found himself slumped in a corner, a grown man in tears…..

Mals journey is a powerful one, and I commend him for sharing his story….

CPC: Who is Malcolm McLeod?

4 years ago I got to the point I was 165kgs (that’s no typo either!) I was over weight and both parents had type 1 or 2 diabetes. I knew had to do something about my weight. So the journey began then and there. I bought a cheap mountain bike and started riding it around the roads. I can still remember the first day when I struggled to ride 2.5 kms! Fast forward just a few shorts years and I now ride 500 plus kms per week!

Outside of that, I am a ruminant nutritionist (google it) 😉 and Genesis by trade, working with a stockfeed company in Northern Victoria and Western Victoria.

CPC: When did you decide you wanted to do an Ironman? And why Ironman Australia (Port Macquarie)?

Mal: After running my first marathon at Melbourne Marathon 2017, I realised I could do an Ironman. (I was under no illusions on how tough it was going to be though) The reason for Port Macquarie – it was as simple as it was the next Ironman I could get too! Plus I didn’t have to fly. 🙂 I only booked in an paid for the race 8 weeks out though, but there was no question, I was going to get to that start line.

CPC: Your family is larger and busier than most, how does the family dynamics come into play and did you have concerns that you wouldn’t be able to make everything work?

Mal: Yes we have a large family with lots of challenges within that, but by setting a great example, and showing the importance of work ethic is so beneficial for the kids. Our daughter and my wife also do a lot of exercise as well, so it’s a team effort. And overall – you just make it work, for us, my training  and racing is part of the ‘family’ now. Our Daughter Majella came to the USA last year with me when I competed in the 70.3 World Championship and now at Port Mac and she also competes in Triathlons as well, so it’s great to see her take up the sport too.

CPC: What gets you out of bed in the morning to train, day in day out? 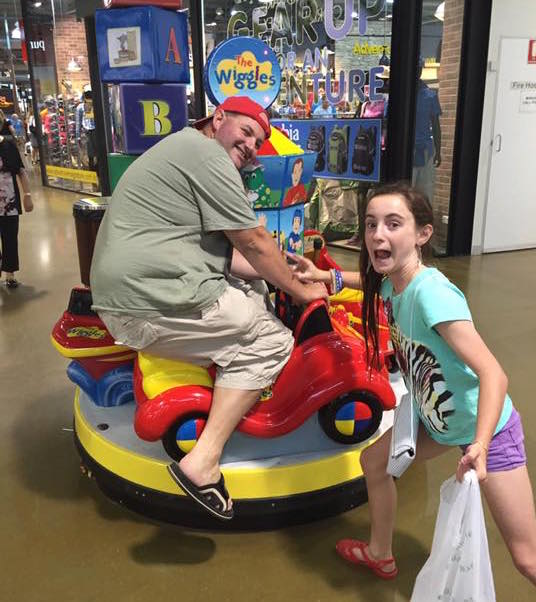 CPC: You didn’t have a coach before starting with CPC in December last year, how much of a change did bringing a coach into the fold make to your training and performance during that time?

Mal: Before coaching, I just exercised very day with no structure as long as I rode a minimum of 500 kms a week and ran a little and swim a little that’s all I did. Once I started on a program with Sarah, all of a sudden I had an even greater purpose and I thrive off numbers and reviewing my training and data. Even though I might ‘annoy’ her by throwing in some unscheduled sessions or unplanned bike races, the numbers don’t lie. I thought I was going alright before, but since starting in December, every month I just keep getting stronger and stronger. My cycling has continued to improve, I started podium and winning bike races, I won my first League Best and Fairest in Cricket, I’ve dropped more weight. The numbers just keep on coming and I love it.

CPC: You raced Challenge Melbourne 2 weeks out from your first Ironman. Some said to you this was too close to race, but you proved that for YOU it was exactly the right decision. Why did you and Coach Sarah decide to race and how did your race at Challenge pan out?

Mal: There was soo much negative comments about me racing Challenge Melbourne. But Sarah and I believe that my body is more like diesel motor that loves lots of work and doesn’t get going that quickly off a cold start. I also live in the country, so don’t get a chance to swim in the open water very often at all, so this was a good chance to practise the swim and put together our race and nutrition planning. Plus we believed it would mentally be god for me. And it was! I had an awesome race, and so went into Port Macquarie with a huge mental boost – coming off a near 30min Personal best in the Half Ironman.

CPC: So less than two weeks later you were on the road to Port Macquarie. What thoughts went through your mind during the long drive?

I can do this! I had a huge PB behind me, the right type of training for me. We’d done the work and the preparation including specific bike training over the past three months between Bright in the North East and Adelaide.  Echuca (where I live) barely has a bump in the road that you can call a hill, so we went looking for short very sharp climbs like Old Coach house drive in Adelaide where there areclimbs like 1-3kms with pinches of 20-23% climbs. This made climbing Mathew Flinders drive on race day much easier!

CPC: Race day finally arrives and you have your daughter Majella there supporting, how special was that for you and for her?

Mal: Great question. The lead up to the race, I wasn’t that great in my mind. Nothing to do with an Ironman or training or being tired, more my own struggles in my own mind.

Having Majella there was amazing, but she doesn’t enjoy getting up too early (teenagers for you!) 😉 so I actually headed to the race by myself. This was a little daunting being in my own head heading down to the race by myself. It was at this point I really missed not having Veronica (my wife) there with me. Her support is immensely beneficial and means so much to me and especially for my head and my heart.

CPC: SO – talk us through your first Ironman. The good. The bad. and the ugly.

Mal: Suffering from mild depression the day before the race I was actually at a point I was going to pull out of the race. I was that close. So I decided to run Park Run Port Macquarie that morning before the race – even though I knew it wasn’t on the program. I knew for me – in my mind, it was what I needed there and then. This turned my day around and I then got myself and my gear together to check in and it was then just one more sleep until race day!

Race morning started off pretty rough. I left our accommodation by myself about 4:50am, with Majella to head down later.

When I got to Transition little things weren’t right. My tyre was flat, and it was enough to set me off. I ended up in a corner, in tears talking to Veronica on the phone. I hit another real low point, I was ready to pull out before I even started.

With the help of Veronica, we were able to pull myself out of the situation, and  I pulled myself together and I finally got ready for the race. If you knew the battles in my own head, then you will totally appreciate this milestone.

I swam really well, I was happy with my time. And pretty much bang on what Coach Sarah and I predicted.

Into transition and I completely changed out of my wetsuit and tri suit into my normal bike riding gear and away I went. The first lap on the bike went really well. The second lap at 105km mark I hit a small wall until I started eating bananas at the 127km mark, where I  was feeling better again. A nice remember on how important nutrition is, and to have back up plans. 🙂

My time on the bike was slower than what I wanted, but with the rough road surface and for slower going. Good news was, I felt totally fine and prepared on the hills.

Into T2, I once again got fully changed out of my riding gear to my running gear (For a person that chafs a lot this was a brilliant idea from the Coach!) I wore a long sleeve top for the run, which meant I was a little hot for the first few kms of the marathon, but it was great later on when the weather cooled down heading into the night.

I finished the marathon off very strong and I was super happy with the final result! (a marathon PB!) 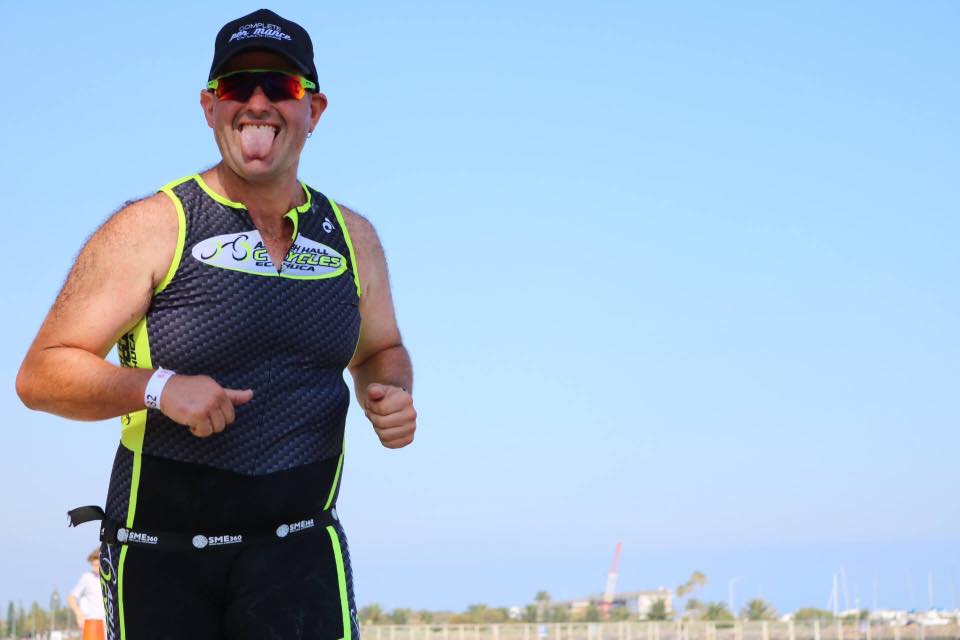 CPC: And the inevitable question everyone asks – would you do another one?

Mal: Yes I will do another one but it will be chosen on a fast course meaning either Busselton or Brazil. But in the short term I would actually like to tackle a few more Half Ironmans in the chase of another World 70.3 Ironman race!

CPC: Any words of wisdom for others who want to tackle an Ironman ?

Mal: Listen to your coach. But also listen too your body and mind. We aren’t all the same so we need coaches who are open minded to coach and support in a manner that aims to improve performance, but also happiness a long the way. Because what’s the point of being fast but unhappy? 😉

What a journey and what an Ironman story Mal, you have come such a long way in what really is such a short time. You are an amazing inspiration to your family and to those around you. You may not do things how everyone else chooses, but only you can write your own story, and you are doing just that. Huge kudos to you for re-writing your story.