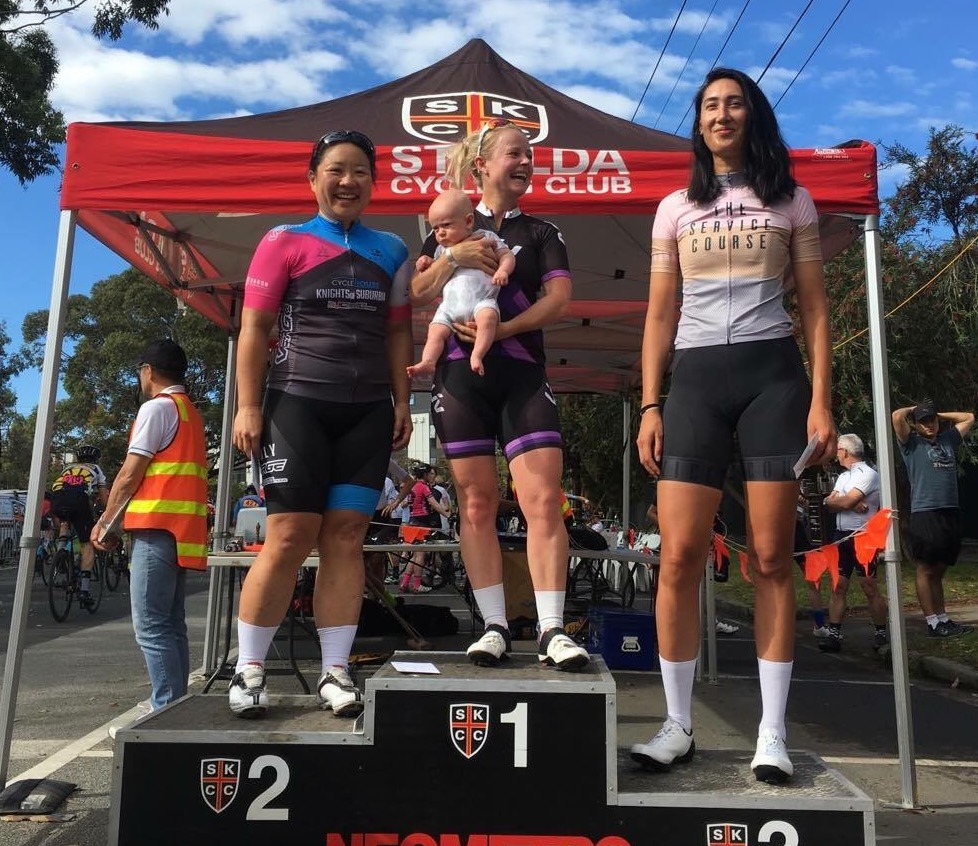 “I wasn’t the strongest physically out there. But what I did have was self belief, and I had absolutely nothing to lose. ”

I love racing. I love the pre-race nerves, that feeling of hesitation in the pit of your stomach, the nervous energy that wants to explode out of you. Others may dread that feeling, but I thrive off it. I love preparing for a race, the energy at the venue, the feelings of anxiousness, the fear of the unknown. I don’t get that feeling from anything else, so I look forward to it.

As it nears 12 months since my last race pre-baby, surprisingly I actually hadn’t missed that feeling though. People would ask me if I missed racing, and I was honest and said I didn’t. I was simply enjoying being able to train to stay fit and healthy and in providing the best possible environment for my growing bump. – and that was my purpose. So I trained and that feeling it gave me afterwards was what I thrived off. That was my ‘high’.

But 3 months post baby (where has that time gone?!) and that feeling wasn’t quite enough anymore. There was a ‘feeling’ that was missing and it started to gnaw away at me. Something was subtly telling me that it was time. I was ready to get those feelings back that no amount of training can replicate.

And that was when I knew I was ready. I haven’t been training specifically to race, I have barely been on the road, I’m definitely not as fit and strong as I have been in the past, I’ve lost top end speed, I’ve lost my endurance, but what I haven’t lost is my drive and my ability to push my body beyond it’s limits.  I’m was no where near race ready, and nor do I want to be at this stage, but I was ready to get back out there, have some fun and see what my body was capable of and I was ready to get those race nerves back!

So as I lined up on the start line of a Crit race on the weekend. I was nervous. ‘I feel like i’m doing my first ever race!‘ I told a friend on the start line. And that was my reminder why I train.  I was born competitive. And this was where I belonged. 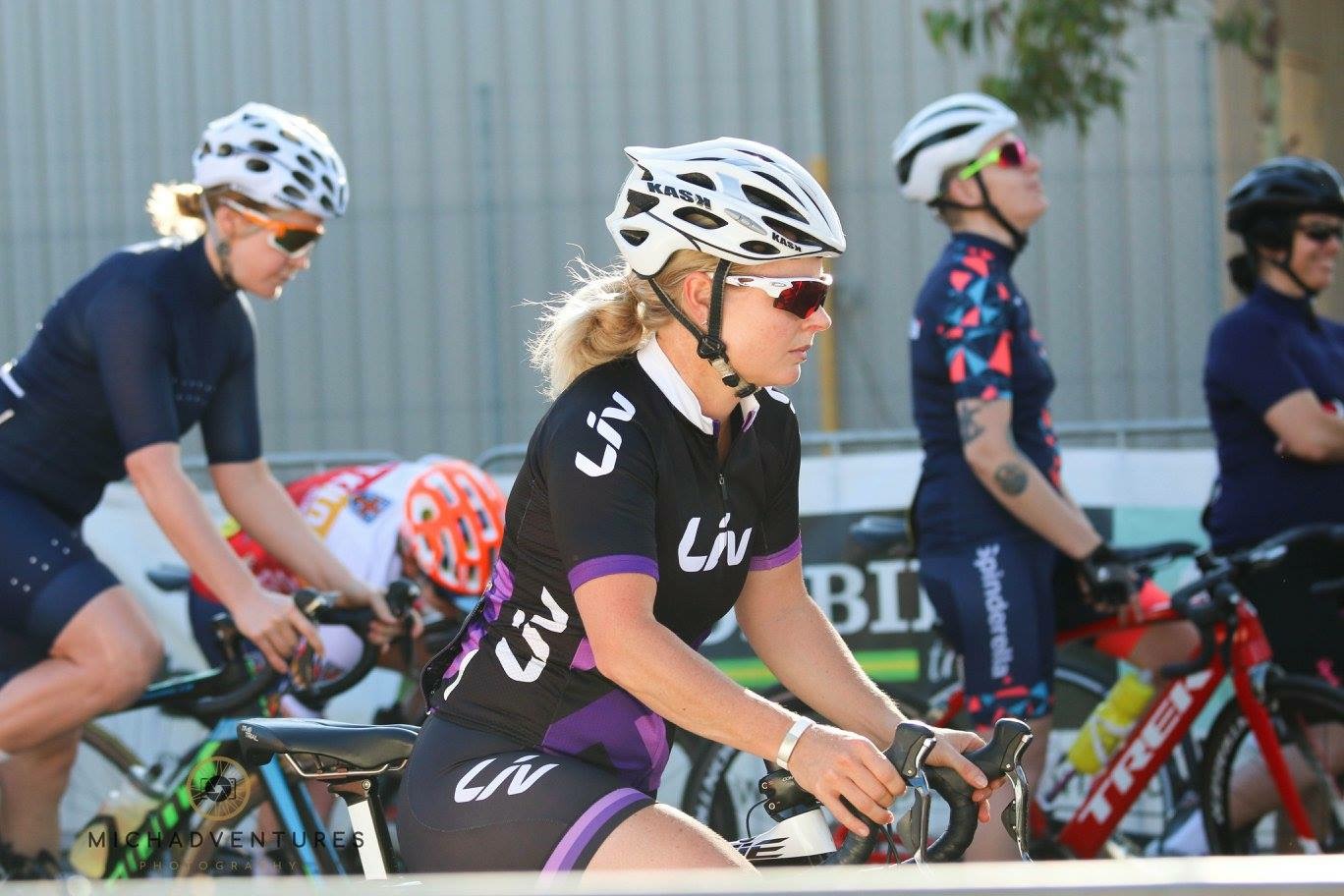 For those who have raced criteriums before, you know it can be a bit of cat and mouse game. It’s not necessarily who is the strongest rider, but who can play it smart, use tactics to put themselves in the best position to cross the line first. Sitting in as much as possible and saving energy until the last part of the race and the all important finish line sprint.  But the ‘triathlete’ comes out in me and I’ve never been able to race like that. I race smart, but I race hard. But if it was going to be hard for me, I was going to make it hard for others too. So despite not being race fit (I can count on one hand the number of times I’ve ridden on the road in the past 6 months), I wasn’t going to stop me having a crack.

As the race went on, the cat and mouse game continued, but I was able to work out who was willing to work and who wasn’t. I knew my legs were able to work for short efforts, but anything longer and the lactic threshold started to build and my body wasn’t able to sustain it. At the same time, I’m not a sprinter, so I knew I didn’t want to be rounding the last lap with the sprinters and having to battle it out for a sprint finish. So I had cracks off the front, I chased others down. I worked hard. I didn’t want it to just be an easy race with a finish line sprint.

So as we neared the end of the race, a couple of laps out from the finish and one rider went and in that moment I thought she was going to win off the front. But I wasn’t ready to give up just yet and a few of us chased and we gradually bridged the gap. As we rounded into the last lap I didn’t feel like I was the strongest, but I said to myself right then that I wasn’t going to listen to my legs, I was going to give everything from the last corner and I started to mentally picture the finish line.

So as we rounded the last corner I dug as deep as I could. I was third wheel but I could feel my momentum building, it was going to be very close. ‘I can’t loose this now‘ I said to myself. My legs and my lungs were screaming at me, and it could have been easy for me to ‘settle’ for second or third – heck I’d just given birth to my baby boy 3 months ago! But I wasn’t willing to settle. So I drove my bike out of the saddle right to the finish line just pipping the other two girls in a tight photo finish.  (not the most glamorous photo, but it definitely sums my race up!) 😉

Where some athletes miss that winning mentality is by settling. It can be easy to be content and say ‘I’m happy with 2nd’, but the question is – are you really? Or are you just settling? Did you allow yourself to settle for second? Or did you actually give every ounce trying to reach first? If you didn’t, why not? What was it that you weren’t prepared to do? Were you not prepared to push that hard? Or was that person out front just that much better than you on the day? You need to be able to answer these questions and be honest with your answers so you can reach your true potential.

So don’t allow yourself to settle. When you think you are done, convince yourself that you have just that little bit more. Break it down. “to the next tree’, ‘pass the next person’, ‘just 5 more minutes of hurt’, whatever your ‘cues’ are use them. And if they aren’t working use something else. It’s a mind game out there. Not just a physical game.

Of course there will nearly always be stronger athletes – that’s the beauty of racing and that’s what helps drives us too. Other days you may just not feel 100% either, a little flat/off, or the legs just didn’t come to play – and that’s ok, as long as you can determine why and as long as you still give 100% on that day.

Something I took away from my time spent last year watching and learning from National Performance Centre Triathlon Head Coach Dan Atkins were some words of wisdom he shared with us: ‘All I ask is for my athletes to give me 100% of whatever they have on that day”.  Re-read that sentence. All Dan asks of his athletes is to give 100% of whatever they have. So even if you only have 80% on the day, as long as you give 100% of that 80%, that’s all that can be asked of you. So don’t settle.

So much of racing is a mental game – not just a physical one. I don’t believe I was the strongest physically out there racing on the weekend. But what I did have was self-belief and a strong mental game. My purpose for the race was to test my mental strength against my physical strength. The end result? A win in my first race back since having my bubs 3 months ago.

This race I can say my mental strength was stronger than my physical one. What I can’t wait for is  when they both line up again on the start line together as strong as each other…..

– Give everything you have on the day, regardless of how you feel.
– Train yourself mentally, not just physically
– Self belief goes a long way to reaching your potential
– Visualise how you want your race to look – a powerful tool to use.
– Be willing to push the line to find where the edge lies.
– Don’t be afraid of the pre-race nerves, use them to your advantage
– Use mental cues/ positive mantras for when a race gets tough
– Don’t settle. Always strive for more. Always.

If you would like me to help you improve both your physical and mental performance, contact me for a chat no matter your level or goals.