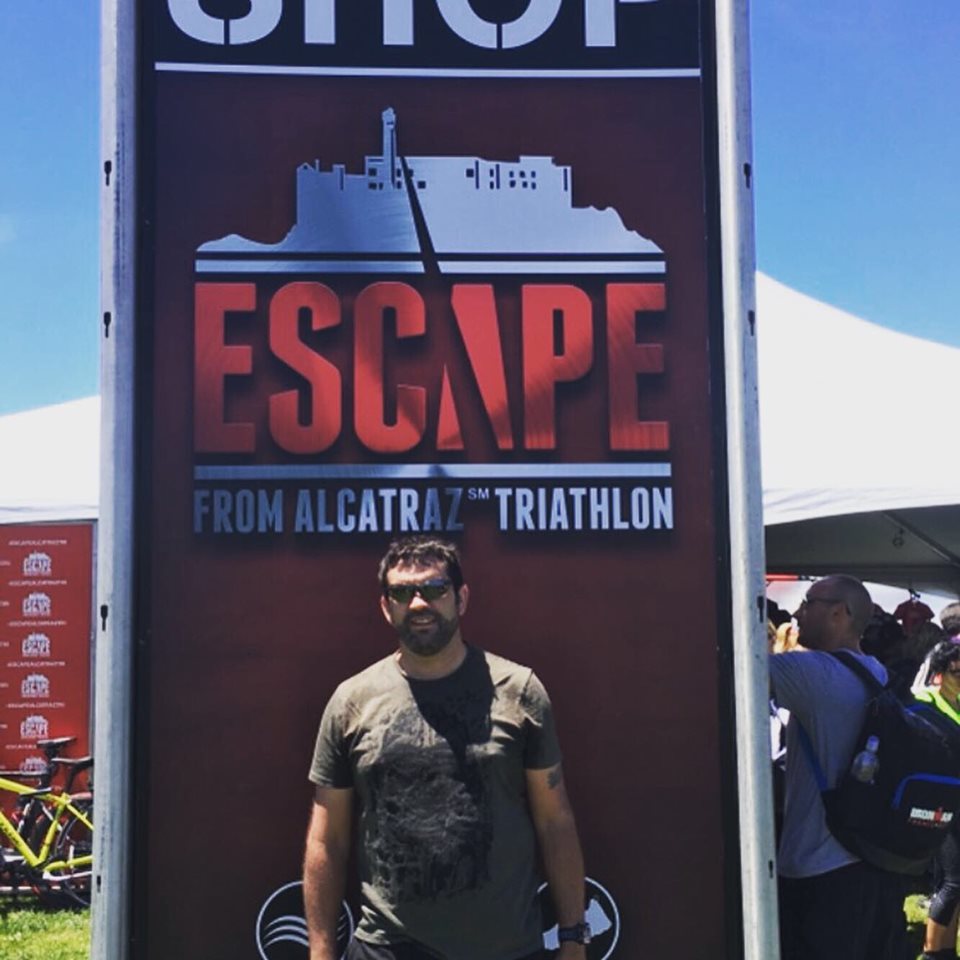 Like most of us triathletes, I watched the Escape from Alcatraz Triathlon and decided this was one for the bucket list! It was a few more years before I decided to have a go and entered the lottery. When I got the email to say I had a slot my first reaction was excitement. The second one was “Oh shit how will I get through that swim!!” (if you haven’t heard about it watch here)

The Race. The Escape from Alcatraz is not a standard triathlon. It is unique with a few new challenges I have not experienced anywhere else before. A 2.5 km swim in the cold waters of San Francisco Bay. Jumping in from a ferry off the shore of Alcatraz Island. (This was pretty cool – literally and figuratively! ) 😉 An amazing but tough 32 km cycle with plenty of hills and climbs. Followed by a 12.5km run with again plenty of hills, soft sand and the sand steps – all keep you honest!

Preparation. I live and train in Deniliquin – country New South Wales. We have a 50m pool which only opens between November through to March, so makes swim training over winter very tough. You either have to travel an hour to a near by town, or you can brace The Edward River, which is ok if you like the cold! To make it even more challenging to train for this race, we don’t have hills to speak of to train on. So sitting down with Coach Sarah to map out a plan we had to be creative!

I did the training that I could and braved the 11 C Edward River. ZWIFT is great and I managed to at least pretend I was cycling up hills. I don’t run to much so continued to shuffle around the bush her in Deniliquin. When possible, I travelled to Melbourne to get some additional sessions in. All in all I was proud of my efforts leading into the race. I could have always done more, but with a demanding and high stress job, we simply worked with what we had and did what we could, and I was content with that.

Pre Race. I arrived in San Francisco on the Wednesday before the race. First thing Thursday morning I collected my hire bike and went for a spin to get used to it. I had a good look around the city and again stressed a little (a lot) when I realised how small Alcatraz Island looked – so far away from the shore! And how steep some of the hills were – no amount of zwifting compared to these! (If you know San Francisco you will know what i’m talking about!)

The race and preparation of the race from the event organisers is fantastic. You get weekly updates giving you advice about the race which I found highly valuable. They tell you what to expect and how to help prepare, but coming from Deniliquin it was still a bit of a shock. Registration the day before is well coordinated but dragged a bit as they send you from one tent to the next to get all your information, forms, bags, drop off gear. We had an unusually warm day with a lot of people scrambling for shade and water.

Race Day. We had a 4am start to get to transition, as all athletes had to be on shuttle busses to the ferry by 6am . I was glad of the extra time as firstly our taxi driver was given the wrong destination and decided to take us to transition via the airport! (stress that wasn’t needed pre race!) Thankfully he was not to fussed about speed limits. I got to transition at 5am to find my back-wheel flat. Thankfully Coach Sarah and I had previously gone over a pre race mental check list with we went through scenarios of when things go wrong – so mentally I was able to work through this easier and not get too stressed. The bike mechanic on hand was great as my bike had tubeless tyres. Whilst I was a little stressed it stopped me thinking of the swim and made the shuttle with plenty of time to spare.

The journey out on the boat was an amazing atmosphere. So much nervous energy with 2500 packed athletes of all shapes and sizes. I was delighted to meet Jorge a Californian also had thought ahead and had a little extra ‘padding’ like me to accommodate the cold swim. 😉 Everyone like in all races was so positive and so encouraging as we got to the start line. They played the national anthem and then it was go time. We queued and with lots of encouragement we jumped! What a moment!

Once I got in and tried to settle into a steady stroke I was delighted to realise that my time in the Edward River was well spent. San Francisco bay was much warmer and with my extra buoyancy I felt good! I misjudged the current and after 50 minutes I managed to make the shore 400-500m downstream of the exit point. Just what I love an extra run across soft sand! It felt great and I was surprised at how much I enjoyed the swim – which is the leg I worry about the most.

Out on the bike. The first 3km are flat and then you hit the hills. They were a lot steeper, longer and tougher than I expected. But I loved every second and managed to pass people going up the hills as well as going back down. Some of the roads were rough but we were well briefed about what to expect. When you are going 8km/hr uphill that does not really matter!! haha.

When I got to transition I knew I had pushed a bit hard and enjoyed the cycle to much. SO at this point, I was not looking forward to the run. The first 3km was flat so I settled into a slow steady shuffle. When I hit the hills there are a lot of narrow tracks, so it was easy to stop and walk as I didn’t want to try and push past people!! My legs were stuffed, and I had not prepared at all for a course like this – pretty hard living in flat country NSW. When you hit the beach and the soft sand it was so somewhat reassuring to see how much we were all suffering and all the support from other competitors and volunteers. Heading back in the sand steps are tough I was so glad to have the rope along the side to help pull yourself up the hill. When I reached the top, I felt faint and walked the next km. I hadn’t come this far to end up passing out and not finish!

With 4km to go the downhill section started to the finish line. I managed to get back into a steady shuffle and continued my way. Like all these races the thrill of finishing, crossing that line and getting that medal make all the training, the self doubt and the hurt all worthwhile!

In summary. This is a tough race. I loved it and would look to go again. The organisation was fantastic and as in every race the volunteers are amazing and looked after us extremely well on the course. Its so good to be able to say I Escaped ! !