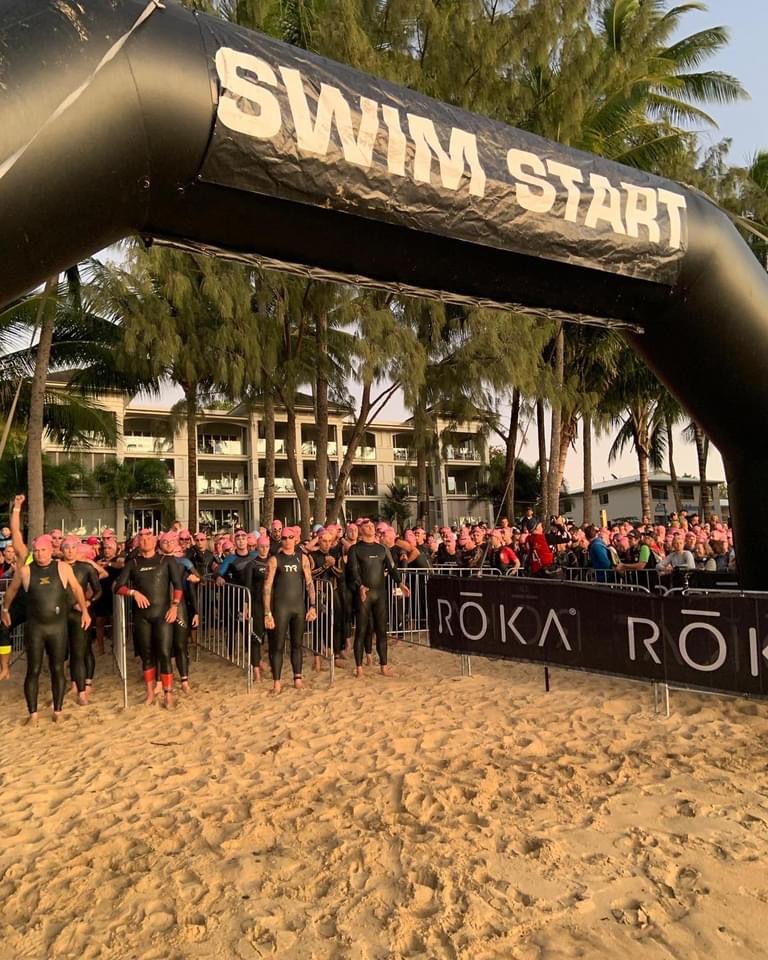 Ironman Cairns and Ironman 70.3 Cairns Race Results and wrap up.

The lessons. The Learnings. The Triumphs. The challenges.

Who wouldn’t want to escape the cold of winter and head north and race and holiday at the same time?! A spectacular place for racing, to put the training into practice and enjoy pushing the boundaries of your own physical and mental limits.

4 CPC athletes and their supporters made their way to the top end of Australia and 4 athletes walked away with shiny new medals around their necks. Including 2 newly crowned first time Ironman Athletes! I always say to athletes – you only get to do your first Ironman ONCE. So make it a memorable one. And that they did.

There was some hard luck stories though. Situations that ended up being out of their control, but what we learnt during the process was not what happens TO you, but how you react. And man did our athletes handle themselves brilliantly through the adversity thrown their way.

I could not be more proud of each of our crew, and each waking away with lessons, a truck load more experience and races that they will forever remember!

If you want to see what a consistent race looks like, then look no further. Steve is a veteran at racing and is a shining example of racing to your level of training and to your own race place. Not what you have done before, not to try and beat someone else. But to beat yourself. With a limited training prep, we went in with our expectations in check, but with a solid race plan. This didn’t mean not pushing the boundaries, or not hurting, (because it still hurts – just ask Steve!) but what it does mean, is that you are measured and in control and that’s what Steve was all day. 👊🏻

Lesson of the race: race your own race and you will finish your race strong.

Our first hard luck story of the day. Swim ticked off, and out on the bike, goal pace and effort in check but 30km in and things came undone. Or locked in to be precise. Breaks jammed on Dave jumped off his bike to see what was going on, a fiddle on the side of the road. Unperturbed he got himself sorted and back on the bike only to discover down the bike gears had a mind of their own, and wouldn’t stay in the big chain ring. So for 60km worked up the hills but could get no speed on the downhills or flat stuck in the small chain ring. Time goals disappearing, but not his will to push on through the diversity.

Jumping off the bike and onto the run to finish with a 20min run PB from his previous race earlier in the year.

Lesson of the race: When things seem out of your control, simply focus on controlling what you can. Push on and push through.

Stay tuned for Rach’s personal re-cap. But what I can say here is this. WHAT AN INCREDIBLE EFFORT! To put her body on the line for this race, to be able to push through so many mental barriers, run bike and run through so much physical pain with her condition of Iliac Artery Endofibrosis that – in her own words, her right leg feels like immense “pain and suffocation. It’s like being strangled” blocking the blood and oxygen to her right leg. And as we all know – sport is about getting as much blood (read oxygen) to our muscles as possible!
Immense pride watching her finish in such a gallant effort – and to finish in the time she did, simply incredible.
Lesson learned: You never know what is possible unless you take the leap of faith. Of trusting in the process. Of pushing past your own barriers. And seeing what may lie on the other side….

If I ever felt the pain and agony of an athlete in a race, then this would have to be it.

Leading into this race, Danes training was spot on. He’d nailed sessions, went from strength to strength and he race ready to execute. He’d dedicated the past few months to this race and he was ready for his first Ironman.

But, 24hrs prior to the race and things started to unravel. Uncontrollable vomiting and toilet stops had him up all day and night. Unable to keep any fluids or fuel down. Race morning and the bus trip was going to be a challenge just getting there without needing to yell at the bus driver to pull over! But he made it. Bus trip mission accomplished. ;-p

He made it to transition. He made it to the start. (not without a few stops between) And he made the decision to at least start and ‘see what happens’.

Well what happened for the next 12+ hours was excruciating for him. Vomiting in the swim (sorry fellow swimmers!) feeling nauseous and lacking his swim power and ability to push, and still managed just over the hr mark. But that was meanly the start of the day. A long way still to go..

On the bike and more vomiting and toilet stops, not to mention stomach cramps from all the vomiting and lack of nutrition, barely able to go down on the TT bars, he limped his way around the bike. Previous time goals not even in the picture, but doing mental calculations on whether he would make it around the course, or whether to jump in the next sag wagon that went past..… 6+hrs of the most mentally and physically grueling rides for all the wrong reasons.

Finally making his way to T2 and able to leave the bike behind. It was now simply about finishing. He’d made it this far, it wasn’t a question now. Walk the marathon if we must, but there was no way he wasn’t going to finish now after nearly 7hrs already. With friends and his partner and beautiful little daughter there supporting he willed his way around the run course. Continually vomiting and numerous toilet stops and next to no nutrition in his system now for 48hrs he was in a bad way.

So to see him come down that finishing chute. To hear those words YOU ARE AN IRONMAN gave me goosebumps. To hug Mon and his daughter and his mates, what a moment after so much pain.

That even though this wasn’t the race we had trained and prepared so hard for, this was the race dished out to him and he fought the hardest fight to win. And win he did !

Lesson learned: Never. Ever give up. The mind is so much more powerful than you give it credit for.